There are many change management models, one that is becoming increasingly popular is one often referred to as:  “The Change House Model“, “The House of Change Model” or the “Four Rooms of Change model”.

History of the Change House Model

Originally developed in the early 1970’s by Claes F Janssen, it’s original or proper name is The Four Rooms of Change or the 4-Room Apartment.

In Janssen’s work this is represented as:

The Four Rooms of Change matrix

Janssen says “Personal Dialectics (1975), it (the model) turns up at the end, as the answer to a particular scientific question, namely how to integrate what I called the outsider’s experience. I had worked with this question for ten years. The book was my Ph.D. thesis.”

It is thought that the ‘Sun Lounge’, ‘Dungeon of Denial’ ( or Cellar of Despair) and ‘Pit of Paralysis’ were added by Ashridge Business School who took Claes’ model and renamed it as the ‘Change House’.

Some claim that the additional rooms may well have been done in association with Ander & Lindstrom Partners and Claes Janssen as they were consultants to Ashridge at the time. This is unfounded. I have since spoken to representatives of the model and they deny that the authors have added these to their original thinking. As you will note from comments to the blog this was not the case. The author (Janssen) believes that if the original model were fully understood, then these adaptations are not necessary. Indeed they may be considered a distraction.

The model is sometimes accredited to Kilbride and Durkins – where this reference is from is not known.

On Janssens site is a wonderful explanation of how to apply the change house model in a section taken from one of his books.

Much like the early work of  Elisabeth Kubler-Ross, who created an awareness of the psychological impact of change, this model looks at the “states” we like to inhabit and have to transition through as a natural part of a change process. 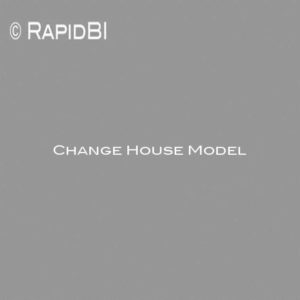 This site uses Akismet to reduce spam. Learn how your comment data is processed.

Ready to use Soft Skills Training Materials From £9.99GBP

The BIR Diagnostic Tool
How To Do A Swot Analysis

Linkedin Posts and articles and comments